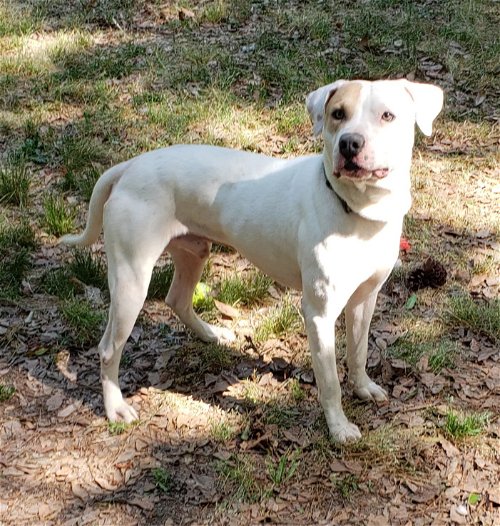 I would love you more than you can imagine.
Please adopt me!

Learn more about the Labrador Retriever.

Print an adoption flyer for Apollo!

All our adoptable dogs are spay-neutered, up to date on vaccinations, fully vetted ,dewormed and heartworm negative and microchipped. Adoption fee $150. Senior dogs $75.  Cats are $65. If you are out of our service area you are responsible for transport and any related fees.

Apollo is a beautiful and strong 60lb dog with a deep bark.  If you live alone wanting a companion dog, that will scare the living daylights out of someone creeping at your door.  His deep BARK will do it.
Apollo is housebroken, LOVES toys, and will demolish any toy given.
The commands he has mastered are, Sit, wait, down, look (catches treats), good boy, find it (treats), catch (treats), kennel up (goes in the kennel).  He is microchipped, neutered, heartworm negative.  He cannot go to someone who will just put him in the backyard.  He doesn't necessarily need to go on car rides or walks in parks as dogs coming at him makes him lunge on the leash.  He is still learning to (leave it). He needs to be part of the home life.  He has had enough of being stuck somewhere alone.

Apollo's background,
Apollo was an owner surrendered with two female dogs, he had been a stray, and they had been feeding him for several months.  He impregnated one of the females during that time, and they had put him in a 10x10 pen in the backyard for several months.
Shortly after Apollo's surrender, the shelter had to replace the roof and put Apollo at an overcrowded 2nd large shelter; he was fed but ignored during his time with the many animals in their care.
After the roof repair was completed, the 1st shelter returned him to their building and went off their information.  When he was surrendered with the female dogs, everyone thought he got along great with dogs.
The 1st shelter assured us he was dog friendly as we can only take dog/people-friendly animals.  We treated him for heartworms we sent him to a partner rescue to find him a home.  That never happened.
WE think his stay at the 2nd shelter something negative happened.
WE have no idea what, as he was dog friendly at intake from the 1st shelter.    It was there with our partner rescue  that it became known he was extremely dog selective with other dogs.  They tried for months to find him a home.  From what we understand, he only got along with one dog there.   None of everything that has happened to Apollo is his fault.  Humans have continually failed him.  In rescue, people want a quick fix.  You can't blame them.  It is very hard, harder than most can imagine finding homes for dogs like Apollo.  Most rescues are fostered based and can't commit to a year in finding a home for a dog like Apollo.  It is rare to find people willing to foster dogs for a significant time.   He was there 9 months.  So now he is back with us and with us he will remain until someone hopefully with see this and think of how handsome he is and want a beautiful dog with a deep bark

Adoption fee is $150 (which includes all vetting plus 1 month heartworm prevention and flea tick prevention, martingale collar, and a bag of the food he is currently on) and she is available for adoption via Shelter Animals Advocates. www.shelteranimalsadvocates.org

Other Pictures of Apollo (click to see larger version):